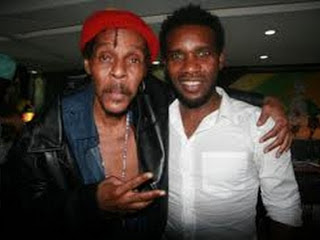 Report coming from Nollywood camp is that ex-Nigerian footballer Austin Jay Jay Okocha has delved into movie production business.
The ace footballer is currently making a movie about the life of Nigerian Raggae Icon Majekodunmi Fasheke popularly called
Majek Fashek.
The yet untitled movie was written by top Nollywood critic Charles Novia.
The movie cast include Francis Duru who acts as Majek Fasek,Stella Damasus, Sam Dede and other big names in Nollywood.
According to the movie writer, Charles Novia, the highly anticipated movie is currently at pre-production stage.
Charles said the crew will travel to New York in October to shoot some scene in the United States of America.
Francis Duru is currently taking some guitar lessons in order to perfectly fit into the role.
“Whatever his travails and the public perception of him, Majek still remain a world class material, who has promoted so much interest world wide with his type of genre of music, So a movie
of his life and career has to meet a world class,” – said Francis Duru
Can’t wait to watch the movie ‘cos Charles Novia is a very talented movie writer.
His movies always make sense no wonder he was nominated for Africa Oscars Awards 2013.
Charles Novia’s latest movie Alan Poza’ has been nominated for Best Comedy, Best Cinematography and Best Editing at NAFCA 2013 in Washington DC.